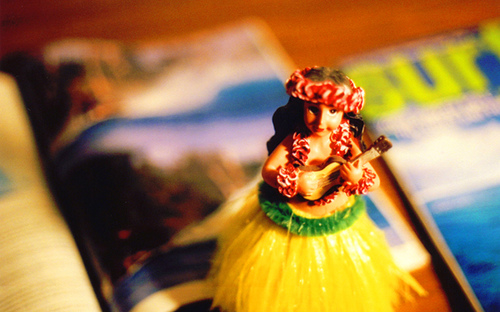 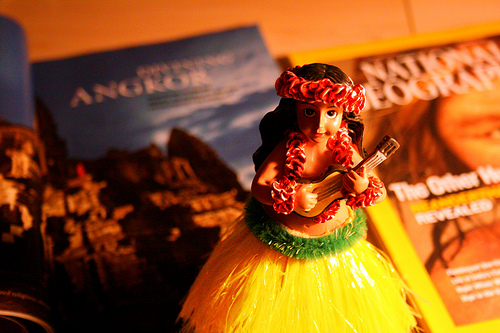 My little hula girl Layla has always been a centerpiece for my desk.  Whenever I’m faced with writer’s block or a mountain of work, she can wiggle away my problems.  These pictures are my homage to the little plastic beauty.

The archaeological world was rocked this week when scientists announced the discovery of a 4.4 million year old fossil skeleton; the oldest prehuman remains ever discovered. Ardi, short for Ardipithecus ramidus represents an exciting piece of our evolutionary past by possessing both human and primate traits. “She’s not a chimp. She’s not a human. She shows us what we used to be,” said paleoanthropologist Tim White of the University of California-Berkeley. Before Ardi’s discovery, Lucy, a 3.8 million year old Australopithecus afarensis, was the oldest early human skeleton yet discovered. Experts believe this new discovery is very, very close to the ‘missing link’ common ancestor of humans and chimps, thought to have lived 5 to 7 million years ago.

The fossils were found in what is known as the Middle Awash, a site in Ethiopia’s Afar Rift, northeast of the capital city of Addis Ababa. The rift is a large triangular depression, where sediments have been accumulating for millions of years. Now parched desert, the landscape was once wet and heavily wooded, with fresh water springs and forests teeming with wildlife.

The first glimpse of Ardi came in 1992 when a former UC Berkeley grad student discovered a tooth among desert pebbles. In 1994, two pieces of a bone from the palm of a hand were discovered by another student. It snowballed from there, leading to the discovery of 110 other skeletal fragments, as well as 150,000 specimens of fossil plants and animals. But the bones were in terrible condition, trampled and scattered so bad that what remained of the skull measured a mere two inches in height. So entire blocks of fossil-rich rock were moved to the National Museum of Ethiopia in Addis Ababa. It took years to remove the clay from the fragile fossils. Ardi’s fossilized remains were very fragile, sometimes disintegrating when they were touched.

No doubt the coming months will be filled with much debate over the theories behind this new discovery. In the meantime, bask in the glow of that which is sexy archaeology!

All of the exciting research can be found in the October 2nd edition of the journal Science.

Not a subscriber? No worries. Head over to the AAAS website where all 11 papers pertaining to this new discovery are available online for free.

Here’s what you need to know about Ardi: